Mark the letter A, B, C, or D on your answer sheet to indicate the ward whose underlined part differs from the other three in pronunciation in each of the following questions.

Mark the letter A, B, C, or D on your answer sheer to indicate the correct answer to each of the following questions.

Question 5: My parents hope to travel around ___ world next summer.

Question 6: If you watch this film, you ____ about the cultures of Southeast Asian countries.

A learned
B. were leaming
C. will leam
D. would learn

Question 7: Paul noticed a job advertisement while he _ along the street.

A. was walking
B. would walk
C. walked
D. had walked

Question 8: Solar energy is not widely used____it is friendly to the environment.

A. since
B. although
C. in spite of
D. because of

Question 9: The sign warns people ____ the dangers of swimming in this river.

Question 10: ___. they were surprised to find their favourite band playing there.

Question 11: Once ___ in large quantities, these products will be more affordably priced.

A. are produced
B. having produced
C. produced
D. producing

Question 12: Jane would never forget___first prize in such a prestigious competition.

A. to be awarded
B. being awarded
C. to have awarded
D. having awarded

Question 13: You should turn off the lights before going out to save___

Question 14:__school fees may discourage many students from aittending university.

Question 15: Drinking too much alcohol is said to___harm to our health.
A. make
B. do
C. lead
D. take

Question 16: At the end of the training course, cach participant was presented with a___completion.

Question 17: The high levels of pollution in the coastal areas are a matter of great concem to the government.

Question 18: Event organisers should plan everything carefully so as to leave nothing to___

Question 19: The discovery of the new planet was regarded as a major breakthrough in astronomy.

Question 20: Mary has finally managed to get round

her strict parents to let her go on a three day excursion with her classmates.

Question 22: These days, many people only read printed newspapers once in a while as they tend to access information online.

Mark the letter A, B, C, or D on your answer sheer to indicate the option that best completes each of the following exchanges.

Question 24: Laura and Mitchell are talking about their school curriculum.
– Laura: “I think Art should be a compulsory subject.”
– Mitchell: “___ Art helps develop creativity.”

A. I quite agree
B. You must be kidding
C. I’m of the opposite opinion
D. I don’t think that’s a good idea

Read the following passage and mark the letter A, B, C, or D on your answer sheet to indicate the correct word or phrase thar best fits each of the numbered blanks from 25 to 29.

Advances in mobile technology and social networking websites mean we spend more time online than ever before. If Facebook were a country, it would be the third largest in the world by population (The Economist, 2010). It is (25)__ not surprising that so many psychologists, sociologists, and others are eager to give their thoughts on how this is impacting negatively on our Society
The biggest criticism levelled at social networking is that young people are losing their offline friends to online friends (26)__ are unable to provide the same deep connection and emotional support. However, a lot of research shows these criticisms are generally (27) Allen et al. (2010) discovered that it is socially adjusted adolescents who are more likely to have a networking profile than those who are not. One study by the Pew Internet and American Life Project (2009) found that people are not (28) __offline friends with online companions but are using them to support their offline relationships. The study also found that social networks allow us to have discussions with a much more diverse set of people than in the real world, so we share knowledge with people from a wide (29) ____ of backgrounds.
(Adapted from “Skillar! Rerding Writing 4’hy Mike Boyle and Lindsay Warwick)

A. While
B. however
C. despite
D. therefore

Read the following passage and mark the letter A, B, C, or D on your answer sheer to indicate the correct answer to each of the questions from 30 to 34.

Visitors to London are struck by the proud splendour and glamour of one of the world’s oldest capitals, admiring iconic sites like Big Ben, the Palace of Westminster and Buckingham Palace. However, visitors seeking a glimpse into the city’s everyday life should not miss Portobello Market, which is the most visited market in London.

This vibrant market has been featured in a number of films, documentaries and best selling books, the most famous being the film “Notting Hill” starring Hugh Grant and Julia Roberts, which brought Portobello Market to the attention of audiences all over the world.
Portobello Market is divided into different sections selling second-hand items, clothing. jewellery. souvenirs and vegetables. The most sought-after area is devoted to antiques. Visitors may feel overwhelmed as there are over 1,000 booths manned by antique dealers from throughout England, It’s a great fun to browse through aintique cameras, watches, pottery and paintings that date back 300 years. They are sold at different prices, so it’s possible to find a few good bargains. It seems that both buyers and sellers look forward to the weekends when they can meet and escape the city’s fast pace at Portobello Market.

When tired from exploring the market, visitors can drop into the nearby food courts to savour an Indian curry, Italian pizza or sandwiches from Europe. It’s a great pleasure to drink a cappuccino while listening to street performers. These represent the lively fun of Portobello Market, offering exciting experiences that keep people coming back.

Question 30: What is the passage mainly about?

A. The film “Notting Hill”
B. The city of London
C. Portobello Market
D. European cuisine

Question 31: According to the passage. Portobello Market has been featured in all of the following EXCEPT___

A. prices
B. bargains
C. buyers and sellers
D. weekends

Question 33: Visitors to the antique area may feel overwhelmed because___

Read the following passage and mark the letter A, B, C, or D on your answer sheel to indicate the correct answer to each of the questions from 35 to 42.

Cambridge University is considering axing compulsory written exams, allowing students to use laptops or iPads instead, after tutors complained that students’ handwriting is becoming illegible. Academics say the move, which would bring an end to over 800 years of tradition, has come about because students rely too heavily on laptops in lectures, and are losing the ability to write by hand.

Dr Sarah Pearsall, a senior lecturer at Cambridge University, said handwriting is becoming a “lost art” among the current generation of students. She added, “It’s increasingly hard for our examiners to read students’ scripts. Those with illegible writing are forced to come back to their collere during the summer holidays to cad their insWCTS aloud in the presence of two UNIVCETILY administrators. It’s extraordinarily commendable that the University is considering reforms to its examination practices.”

Sir Anthony Seldon, Vice-Chancellor of the University of Buckingham, said it is inevitable that universities will move to computers as handwriting deteriorates in the coming years. “We have lo accept the reality. Handwriting has now become an optional, not a necessary. part of wucation. There simply isn’t the same time in the curriculum for leaming elegant, beautiful handwriting. Life is so quick now. Everybody writes as if they were a doctor writing a prescription,” he said. “Handwriting is not necessary for great thought. great English, or great intelligence. Some of our finest wordsmiths today write using laptops, and we have to fight to preserve what is really important, such as the use of great English or great sentence structures.”

Others, however, were not very positive about the move. Tracey Trussell, a handwriting expert, urged Cambridge to ensure that students continue to write by hand. She said, “It’s vital that people continue to write by hand. Writing by hand improves memory and equates to a higher rate of comprehension and information retention.” There is also concem that schools could follow Cambridge’s example by moving away from handwriting. Dr Jane Medwell, Associate Professor of Education at the University of Nottingham, is concerned that scrapping handwritten exams in universities could prompt “downward curriculum pressure” on primary and secondary schools to follow suit.

Question 35: Which of the following best serves as the title for the passage?

Question 36: According to paragraph 1. Cambridge University has a long-standing tradition of___

Question 37: The word “Those” in paragraph 2 refers to___
A. examiners
B. students
C. scripts
D. administriton

Question 39: It can be inferred from what Sir Anthony Seldon said in paragraph 3 that___

Question 40: The word “scrapping” in paragraph 4 is closest in meaning to___

Question 41: As mentioned in paragraph 4, writing by hand can___

Question 42: Which of the following statements is TRUE according to the passage?

A. Cambridge University’s move away from handwriting has already set an unprecedented example for other schools to follow.
B. Sarah Pearsall acknowledged handwriting as an art form to be preserved among the current generation of students at Cambridge University
C. Sir Anthony Seldon claimed that learning to use great English was more important than learning to write by hand beautifully.
D. Most of the tutors at Cambridge are skeptical of the university’s decision regarding handwritten exams.

Question 43: My friends and I go usually to the park on the weekend.

Question 46: In Vietnam, football is more popular than basketball.

Question 47: “What are you going to do after school, Anne?” Kevin asked,

Question 48: Sally paid for her travel in advance, but it wasn’t necessary.

Question 49: Jenifer rejected the job offer. She now regrets it.

Question 50: Mike became a father. He felt a strong sense of responsibility towards his parents. 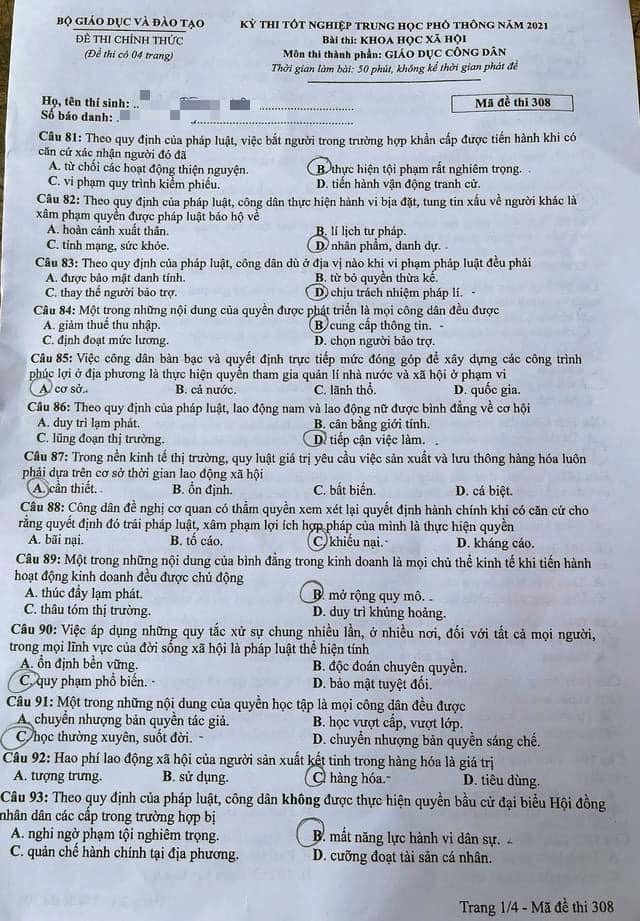 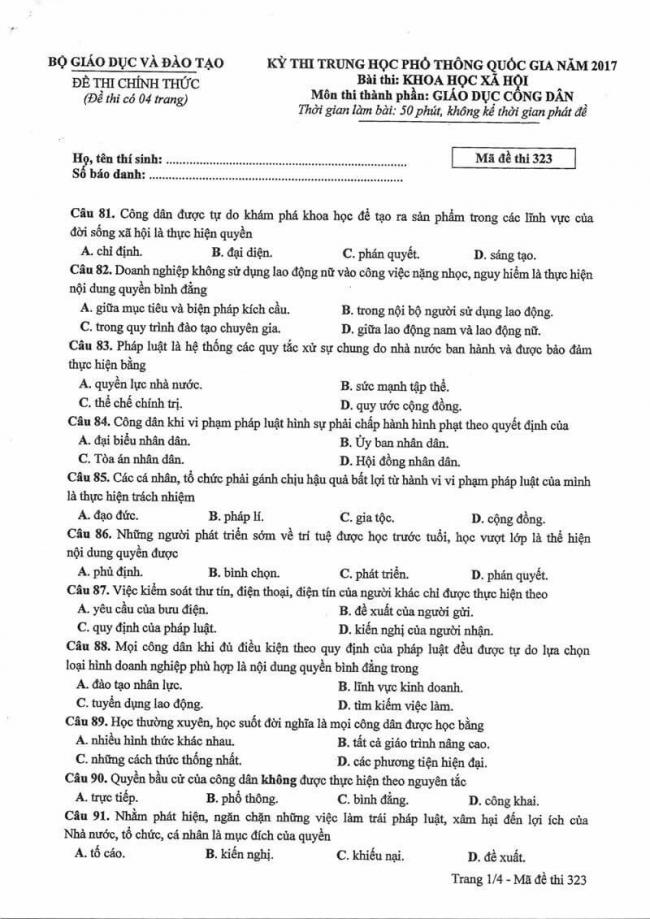 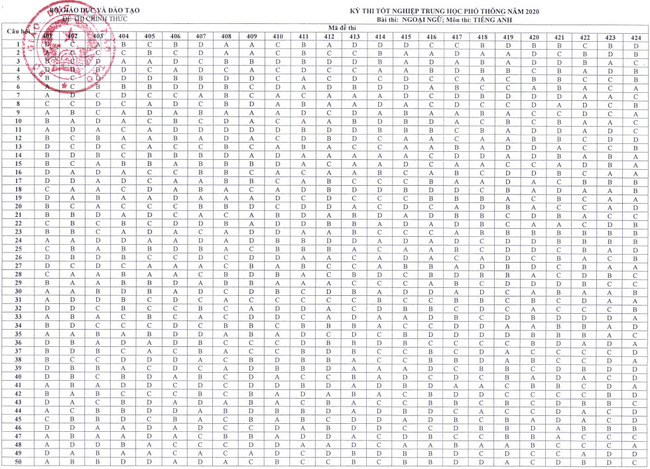 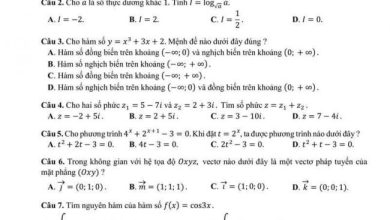