Choose the word whose underlined part differs from the other three in pronunciation in each of the following questions.

Choose the word that differs from the rest in the position of the main stress in each of the following questions.

Choose the correct answer to each of the following questions.

Question 5: When I was at the primary school, my grandmother ________me to school every day.

Question 6: Chinese ________ by more than one billion people all over the world.

A. where her hat was

B. where was her hat

C. was where her hat

D. her hat was there

Question 10: In the 19th century, workers liked wearing jean cloth because it was strong and did not  ________ easily.

Question 15: Nowadays,________can watch a variety of local and international programs on different channels.

Question 16: Practising English with native speakers is a good way to  ________ the speaking skill.

Question 17: Thousands of lives were saved  ________ the scientists had warned them about the tsunami.

Question 19: Many people become ________because of the natural disaster.

Question 20: Scientists can usually________ when a volcano will erupt.

Question 21: Why not ________garbage bins around the schoolyard to keep it clean?

Choose the underlined part that needs correction in each of the following questions.

Question 23: The participants said that they have to separate the rice from the husk and then cook the rice.

Question 24: Jane looked sadly and worried this morning. I wonder what happened to her.

Question 25: Sleeping well is as important to good health as to eat well.

Choose the word(s) which is CLOSEST in meaning to the underlined word(s) in the following sentences.

Question 26: I am disappointed that people have destroyed this land.

Question 27: Tet is a festival which occurs in late January or early February.

Choose the word(s) which is OPPOSITE in meaning to the underlined word(s) in the following sentence.

Question 28: If you want to save money, you should cut down the amount of water your family use.

Question 29: Susan and Denis are talking about their favourite sports.

Question 30: Hana: “I think we should take a shower instead of a bath to save water.”

A. How do we save energy?

D. What do you save?

Read the following passage and choose the correct word or phrase that best fits each of the numbered blanks.

The human civilization underwent many changes and development with the passage of time. In course of time, cities became the major centers of livelihood. A city has large population compared to a town and a village. Life is full (31)________ activities in a big city. It is a center of education, trade and industry, (32)________, etc. Life in a big city starts early in the morning. School children, office-workers, and others fill (33)________roads, bus-stops and the vehicles. The market places get crowded with people. Life in the city has certain charms. The factories and the industrial centers give employment to thousands of people. Those (34)________ work hard in cities rise in life. Here, neighbors live like (35)________. Everyone finds himself in hurry and worry. The atmosphere is polluted. There is competition in every sphere. However, cities add to the economic development of a nation.

Read the following passage and choose the correct answer to each of the questions.

SAVING THE ENVIRONMENT: ONE HOME AT A TIME

Pollution can be seen not only throughout the world, but also in our own homes. It comes from household chemicals, the amount of water people use and the waste people produce and throw away. What can be done to stop this pollution? Surprisingly, a person can help save the environment by doing simple things.

First, we need to recycle, which allows products to be used over and over again. Recycling can also reduce the number of trees cut down to produce paper products. It takes very little effort. It is not hard to place plastic and glass bottles, aluminum cans and paper in a bin. Anyone can do it.

Second, we need to watch the amount of water used in the home. It can be conserved by taking short showers instead of baths, repairing leaky faucets, using the dishwasher or washing machine only when fully loaded, or simply turning the faucet off while brushing your teeth.

Third, we need to reduce waste. We need to recycle whenever possible, but should also try to use this waste effectively. For example, grass clippings and food scraps can be made into compost for plants. The average person produces 4.3 pounds of waste every day, but we can reduce that amount by recycling and reusing. If we do our part in our own homes, we can help keep the planet from becoming more polluted.

A. water in rivers

B. water from households

A. never cut down trees

B. use products again and again

A. take short showers instead of baths

C. fully use the washing machine

D. turn the faucet off while brushing your teeth

A. plants need to develop

B. a person can do it in his home

C. waste can be recycled and reused

Part 1. Finish the second sentence in such a way that it means exactly the same as the sentence given.

Question 41: I haven’t seen that man before.

Question 42: Although Bill took a taxi, he still arrived late for the concert.

Question 43: I don’t know how to design a website.

Question 44: He often gets bad marks because he is lazy.

Question 45: She would rather read a book than watch TV.

Question 46: The owner of that sports car is very rich. (WHO)

Question 47: There has been a considerable improvement in the quality of life in the countryside. (CONSIDERABLY)

Question 49: Her parents don’t want her to smoke at home. (OBJECT) 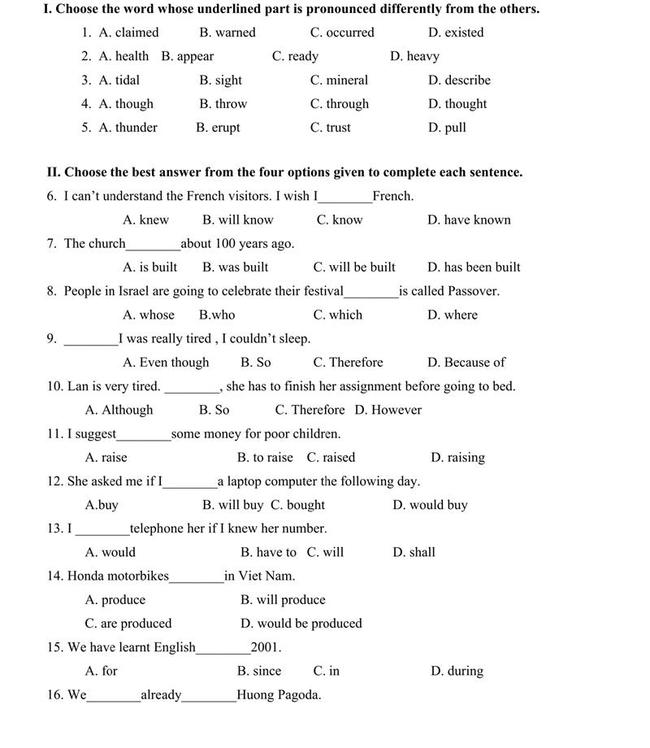 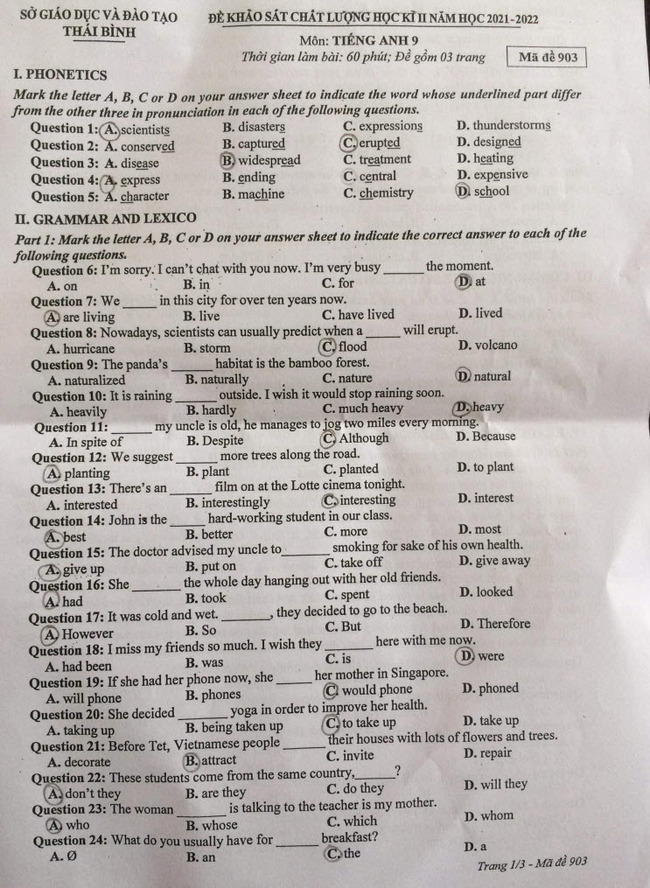