Mark the letter A, B, C or D on your answer sheet to indicate the best answer to each of the following questions.

Question 7: The International Red Cross helps people in need without any discrimination based on _____, race, religion, class or political opinions.

Question 10: She was _____ horror when reading the news about the explosion.

Question 12: Florida, _____ the Sunshine State, attracts many tourists every year.

A. that is known as

B. which is known as

C. which known as

Question 13: Linda insisted that the newly-born baby _____ after her husband’s father.

A. ought to be named

B. must be named

D. could be named

Question 14: _____ interested in that subject, I would try to learn more about it.

A. not to swimming

A. put him off

B. put him down

C. put him through

Question 17: Our flight from Bangkok to London was delayed _____ the storm.

C. in spite of

Question 18: She was overjoyed because her article _____.

A. has been published

C. had been published

Question 19: A revolution in women’s fashion during the second half of the twentieth century made trousers acceptable for almost all activities.

Question 20: The treaty explains the terms of the agreement to reduce nuclear arms.

Question 21: This is new washing machine is not a patch on our old one. These clothes are still dirty.

A. to be expensive

B. to be broken

C. to be strange

D. to be better

Question 22: His career advancement was slow and he did not gain any promotion until he was 40, when he won the position of the company’s Chief Executive.

Mark the letter A, B, C or D on your answer sheet to indicate the most suitable response to complete each of following exchanges.

Question 23: Long is inviting Hoa to see a film tonight.

– Long: “Do you fancy going to the movie this evening?”

D. That would be nice!

A. That blouse suits you perfectly, Lan.

B. I wonder if you could do something for me.

C. Can you come over after the show?

D. How about your new blouse?

Read the following passage and mark the letter A, B, C or D on your answer sheet to indicate the correct word(s) for each of the blanks from 25 to 27.

The United Nations Children’s Fund, formerly the United Nations International Children’s Emergency Fund (UNICEF), is undeniably a program of the United Nations devoted (25) _____ aiding national efforts to improve the health, nutrition, education, and general welfare of children. UNICEF was created in December 1946 for the (26) _____ of relief to children in countries devastated by World War II. After 1950 the fund’s efforts were directed towards general programs for the improvement of children’s welfare, particularly in (27) _____ countries, as well as those in various emergency situations.

The change in the organization’s name to the United Nations Children’s Fund was a reflection of this shift in function. Much of UNICEF’s effort (28) _____ in fields in which relatively small expenditure could have a significant impact on the lives of children, such as the prevention and treatment of certain diseases and the distribution of surplus food, additional activities to health personnel, the construction of education facilities and the training of teachers, and the extension of other welfare services. Their humane activities are financed both by government and private (29) _______ contributions.

C. has been made

Read the following passage and mark the letter A, B, C or D on your answer sheet to indicate the correct answer to each of the questions.

Before the mid-nineteenth century, people in the United States ate most foods only in season. Drying, smoking, and salting could preserve meat for a short time, but the availability of fresh meat, like that of fresh milk, was very limited; there was no way to prevent spoilage. But in 1810 a French inventor named Nicolas Appert developed the cooking-and-sealing process of canning. And in the 1850’s an American named Gail Borden developed a means of condensing and preserving milk. Canned foods and condensed milk became more common during the 1860’s, but supplies remained low because cans had to be made by hand. By 1880, however, inventors had fashioned stamping and soldering machines that mass-produced cans from tinplate. Suddenly all kinds of food could be preserved and bought at all times of the year.

Other trends and inventions had also helped make it possible for Americans to vary their daily diets. Growing urban populations created demand that encouraged fruit and vegetable farmers to raise more produce. Railroad refrigerator cars enabled growers and meat packers to ship perishables great distances and to preserve them for longer periods. Thus, by the 1890’s, northern city dwellers could enjoy southern and western strawberries, grapes, and tomatoes, previously available for a month at most, for up to six months of the year. In addition, increased use of iceboxes enabled families to store perishables. An easy means of producing ice commercially had been invented in the 1870’s, and by 1900 the nation had more than two thousand commercial ice plants, most of which made home deliveries. The icebox became a fixture in most homes and remained so until the mechanized refrigerator replaced it in the 1920’s and 1930’s.

Almost everyone now had a more diversified diet. Some people continued to eat mainly foods that were heavy in starches or carbohydrates, and not everyone could afford meat. Nevertheless, many families could take advantage of previously unavailable fruits, vegetables, and dairy products to achieve more varied fare.

A. unavailable in rural areas

B. shipped in refrigerator cars

D. a staple part of the American diet

A. a kind of weather

B. a particular time of year

D. a method of flavoring food

Question 32: Which of the following statements is supported by the passage?

A. Tin cans and iceboxes helped to make many foods more widely available.

B. Commercial ice factories were developed by railroad owners.

C. Most farmers in the United States raised only fruits and vegetables.

Question 33: It can be inferred that railroad refrigerator cars came into use __¬___.

Question 34: What does the passage mainly discuss?

A. Causes of food spoilage

B. Commercial production of ice

C. Inventions that led to changes in the American diet

Read the following passage and mark the letter A, B, C or D on your answer sheet to indicate the correct answer to each of the questions.

In the very distant geological past, all animals were aquatic. The very first vertebrates or animals with backbones, of which we have any fossil record, lived in water. These vertebrates, the fish, were adapted to underwater living. Their streamlined bodies were covered with scales to reduce surface friction; they had muscular tails so that they could swim swiftly in such a dense medium as water; and they were endowed with gills for breathing underwater.

Descendants of fish-type ancestors crossed the seashore barrier and accommodated themselves to life on land. As amphibians, they possessed limbs instead of fins and lungs instead of gills. But they never became completely free of the bonds that tied them to the water; even today many amphibians return to the water to lay their eggs.

Millions of years after the first clumsy amphibians crawled over the land, newer types of land dwellers appeared, these animals gave rise to the present-day reptiles and mammals. They were completely converted for land dwelling, with bodies and biological activities far different from those of fish. With these special adaptations, mammals have been able to colonize the woods and meadows, the deserts and high mountains, often far removed from the sea.

Question 35: Of the animals with backbones, the first to appear were _____.

Question 36: Fish are suited to underwater life because of their_____.

A. scales, gills and bodies

B. backbones and tails

A. reptiles and mammals

B. bodies and biological activities

A. when they were fully adapted to land

B. after they could walk on two feet

C. when they became amphibious

D. if they migrated to sea periodically

Question 41: The seashore was a barrier for descendants of fish-type because_____.

A. crossing it required bodily changes

B. every attempt to cross it ended in death

C. the land once rose much higher above the sea

D. once they crossed, there was no return

A. The evolution of animals

B. The adaptation process

C. The historical of animals

D. The vertebrates and amphibians

Mark the letter A, B, C or D on your answer sheet to indicate the sentence that is closest in meaning to each of the following questions.

Question 43: “Why don’t you asked the teacher for help?” Peter asked me

A. Peter advised me to ask the teacher for help.

B. Peter recommend me not to ask the teacher for help.

C. Peter told me the reason why I did not ask the teacher for help.

D. Peter suggested that he should ask the teacher for help.

Question 44: People say that six out of the seven wonders of the ancient world were destroyed.

A. It was said that six out of the seven wonders of the ancient world were destroyed.

B. Six out of the seven wonders of the ancient world is said to be destroyed.

C. Six out of the seven wonders of the ancient world is said to have destroyed.

D. Six out of the seven wonders of the ancient world are said to have been destroyed.

Question 45: Without transportation, our modern society would not exist.

A. If there were no transportation, our modern society would not exist.

B. If transportation no longer exists, our modern society will not exist.

C. Our modern society does not exist if there is no transportation.

D. Our modern society will not exist without having traffic.

Question 46: He approached the house. Soon afterward the policeman stopped him.

A. No sooner had he approached the house than the policeman stopped him.

B. Hardly had he approached the house than the policeman stopped him.

C. No sooner had he approached the house when the policeman stopped him.

D. Hardly he had approached the house when the policeman stopped him.

A. The house that I was born is for sale.

B. The house in which I was born is for sale.

C. The house which I was born is for sale.

D. The house where I was born in is for sale.

Question 48: A beaver uses its strong front teeth to cut down trees and peel off its bark.

Question 49: One or the other of the secretaries have to attend the meeting. But both of them are reluctant to do so.

Question 50: A paragraph is a portion of a text consists of one or more sentences related to the same idea. 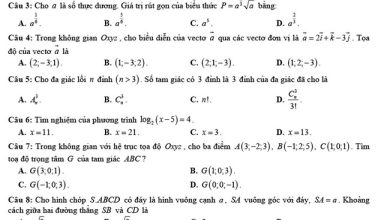 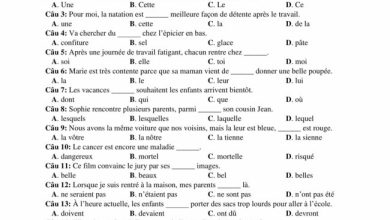 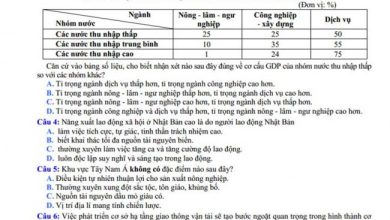 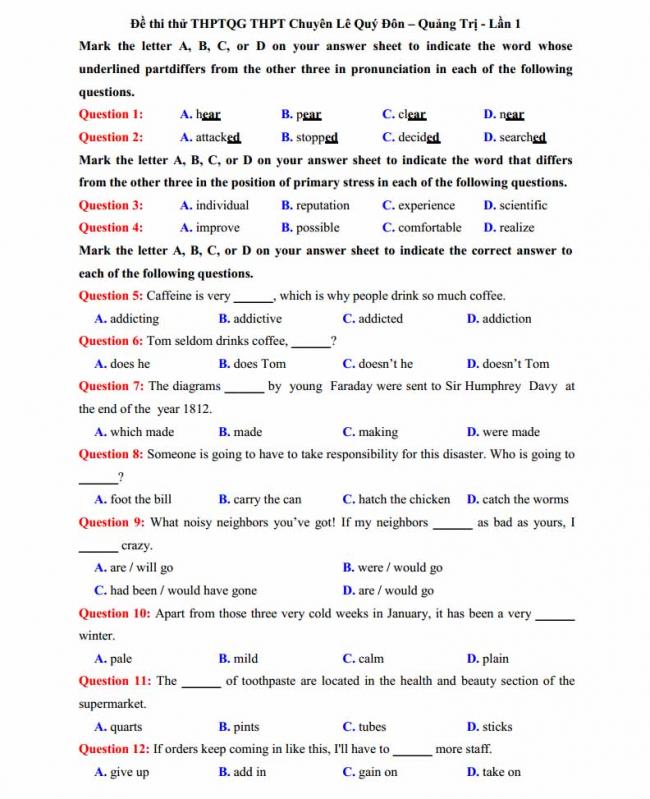 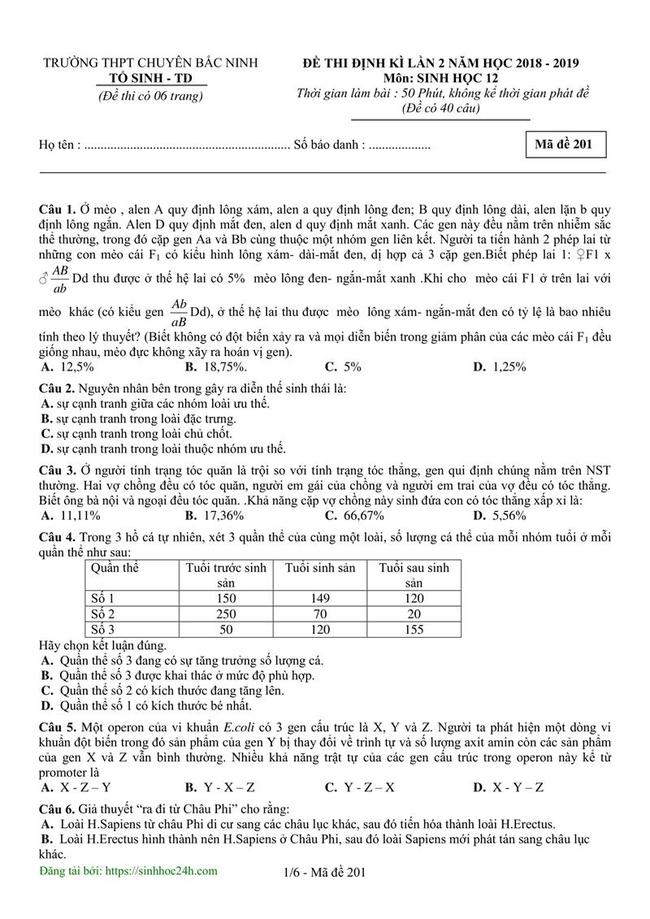 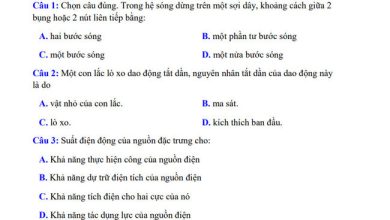