Mark the letter A, B, C, or D on your answer sheet to indicate the word whose underlined part differs from the other three in pronunciation in each of the following questions from 1 to 2.

Mark the letter A, B, C, or D on your answer sheet to indicate the word that differs from the other three in the position of primary stress in each of the following questions from 3 to 4

Mark the letter A, B, C, or D on your answer sheet to indicate the correct answer to each of the following questions from 5 to 18.

Question 7. Tom had already driven 10 km when he realized he was lost.

Question 10. …………….an Oscar last year, she’s now one of the most powerful movie stars in the industry.

B. The winning of

C. I was exhausted

D. to be given

Question 15. The company’s position with ……………….. to overtime is made clear in their contracts.

Question 17. Susie and Francis …………….in on us last night, so I had to quickly defrost a pizza.

Mark the letter A, B, C, or D on your answer sheet to indicate the word(s) CLOSEST in meaning to the underlined word(s) in each of the following questions from 19 to 20

Question 19. The crew divided the life preservers among the twenty terrified passengers as the ship began to sink.

Question 20. We whiled away the time at the airport by reading magazines

A. passed time in a leisurely manner.

B. waited for the time to pass

C. took a lot of time to wait

D. waited for a while.

Mark the letter A, B, C, or D on your answer sheet to indicate the word(s) OPPOSITE imeaning to the underlined word(s) in each of the following questions from 21 to 22.

Question 21: The consequences of the typhoon were disastrous due to the lack of precautionary measures.

Question 22: Vietnam’s admission to the World Trade Organization (WTO) has promoted its trade relations with other countries.

Mark the letter A, B, C, or D on your answer sheet to indicate the option that best completes each of the following exchanges from 23 to 24.

Question 23.  Tom and Mary are talking about the volunteer work they are doing this weekend.

Tom: What kind of volunteer work are you participating in?

D. It is interesting that we’re doing charity

Question 24. Peter and Susan are talking about their plan to make the beach clean.

Peter: Let’s clean up the beach on Saturday morning.

A. That sounds great.

Read the following passage and mark the letter A, B, C, or D on your answer sheet to indicate the correct word or phrase that best fits each of the numbered blanks from 25 to 29

A …….(25) is a person ,usually a woman, who believe that women should be regarded as equal to men. She, or he deplores…………(26) against women in the home, place of work or anywhere, and her principal enemy is the male chauvinist,…………………..(27)  believes that men are natural superior. Tired of being referred to as the weaker sex, women are becoming more and more militant …..(28) citizens and are winning the age-old battle of sexes. They are no longer content to be regarded as inferior class in terms of economic, political and social status. We no longer live in the male- dominated society of the past. Let us hope ,…………(29), that the revolution stops before we have a boring world in which men and women are the same.

Read the following passage and mark the letter A, B, C, or D on your answer sheet to indicate the correct answer to each of the questions from 30 to 34.

A recent investigation by scientist at the Geological Survey shows that strange animals behavior might help predict future earthquakes. Investigators found such occurrences in a ten kilometer radius of the epicenter of a fairly recent quake. Some birds screeched and flew about wildly; dogs yelped and ran around uncontrollably. Scientists believe that animals can perceive these environmental changes as early as several days before the mishap because have certain instincts that humans don’t possess.

In 1976 after observing animal behavior, the Chinese were able to predict a devastating quake. Although hundreds of thousands of people were killed, the government was able to evacuate millions of other people and thus keep the earth toll at a lower level

Question 30. What prediction may be made by observing animal behavior?

A. an impending earthquake

B. the number of people who will die

C. the ten- kilometer radius of the epicenter

Question 31.  Why can animals perceive these changes when humans cannot?

A. Animals are smarter than humans.

B. Animals have certain instincts that humans don’t possess.

C. By running around the house, they can feel they vibration.

Question 32.  Which of the following is not true?

A. Some animals may be able to sense an approach earthquake.

B. By observing animals behavior scientists can predict earthquake.

C. The Chinese have successfully predicted an earthquake and save many lives.

D. All birds and dogs in a ten- kilometer radius of the epicenter went wild before the earth quake

Question 33. In this passage the word “evacuate” mostly means:

Question 34. If scientists can accurately predict earthquake, there will be

B. a lower death rate.

Read the following passage and mark the letter A, B, C, or D on your answer sheet to indicate the correct answer to each of the questions from 35 to 42

One of the factors contributing to the intense nature of twenty-first-century stress is our continual exposure to media – particularly to an overabundance of news. If you feel stressed out by the news, you are far from alone. Yet somehow many of us seem unable to prevent ourselves from tuning in to an extreme degree.

The further back we go in human history, the longer news took to travel from place to place, and
the less news we had of distant people and lands altogether. The printing press obviously changed all that, as did every subsequent development in transportation and telecommunication.

When television came along, it proliferated like a population of rabbits. In 1950, there were 100,000 television sets in North American homes; one year later there were more than a million.

Today, it’s not unusual for a home to have three or more television sets, each with cable access to perhaps over a hundred channels. News is the subject of many of those channels, and on several of them it runs 24 hours a day.

What’s more, after the traumatic events of September 11, 2001, live newscasts were paired with perennial text crawls across the bottom of the screen – so that viewers could stay abreast of every story all the time.

Needless to say, the news that is reported to us is not good news, but rather disturbing images and sound bytes alluding to disaster (natural and man-made), upheaval, crime, scandal, war, and the like. Compounding the problem is that when actual breaking news is scarce, most broadcasts fill in with scare stories about things that possibly might threaten our health, safety, finances, relationships, waistline, hairline, or very existence in the future. This variety of story tends to treat with equal alarm a potentially lethal flu outbreak and the bogus claims of a wrinkle cream that overpromises smooth skin.

Are humans meant to be able to process so much trauma – not to mention so much overblown anticipation of potential trauma – at once? The human brain, remember, is programmed to slip into alarm mode when danger looms. Danger looms for someone, somewhere at every moment. Exposing ourselves to such input without respite and without perspective cannot be anything other than a source of chronic stress.

Question 35: According to the passage, which of the following has contributed to the intense nature of twenty-first-century stress?

A. The degree to which stress affects our life

B. Our inability to control ourselves

C. An overabundance of special news

D. Our continual exposure to the media

A. printing, transportation, and telecommunications were not developed

B. means of communication and transportation were not yet invented

C. most people lived in distant towns and villages

D. the printing press changed the situation too slowly

Question 39: According to the passage, when there is not enough actual breaking news, broadcasts______.

A. are full of dangerous diseases such as flu

B. send out live newscasts paired with text across the screen

C. are forced to publicize an alarming increase in crime

Question 40: Which of the following is NOT true, according to the passage?

A. The only source of stress in our modern life is the media.

B. Many TV channels supply the public with breaking news.

C. Many people are under stress caused by the media.

D. The news that is reported to us is not good news.

Question 42: What is probably the best title for this passage?

A. Developments in Telecommunications

B. The Media – A Major Cause of Stress

Mark the letter A, B, C, or D on your answer sheet to indicate the underlined part that needs correction in each of the following questions from 43 to 45.

Question 43: I remember that I danced not good the first time I did the tango.

Question 44: The wooden fence surrounded the factory is beginning to fall down because of the rain.

C. to fall down

Question 45: While models of automobiles date back as far as the late 1600’s, the 1880’s seen the first commercial interest in the vehicle.

Mark the letter A, B, C, or D on your answer sheet to indicate the sentence that is closest in meaning to each of the following questions from 46 to 48

Question 46: “Sure, I’ll lend you my car this afternoon,” Richard said to me.

A. Richard asked me to lend him my car.

B. Richard refused to lend me his car.

D. Richard agreed to lend me his car.

Question 47: If I had worked harder, I would have passed the exam.

A. As I did not work hard enough, I did not pass the exam.

B. I failed the exam, so I will have to work harder.

C. I passed the exam because I worked harder than others.

D. Although I worked very hard, I did not pass the exam.

Question 48: The gardens are open each day for visitors to enjoy the flower displays.

A. In order to enjoy the flowers each day, visitors open their own displays.

B. There are too many flower displays for visitors to enjoy each day.

C. As long as visitors enjoy the flower displays, the gardens are still open each day.

D. The gardens are open each day so that visitors can enjoy the flower displays.

Mark the letter A, B, C, or D on your answer sheet to indicate the sentence that best combines each pair of sentences in the following questions from 49 to 50.

Question 49: I had to do my homework. I could not help my mother with the washing-up.

A. Because I was busy doing my homework, I could not help my mother with the washing-up.

B. It was impossible for me to do my homework although my mother helped me with the washing-up.

C. I could not help my mother with the washing-up until I finished my homework.

D. I could not do my homework because I had to help my mother with the washing-up.

Question 50: The football match was so exciting. The spectators at the stadium cheered wildly all through it.

A. Despite the exciting football match, not all the spectators at the stadium cheered wildly all through it.

B. The spectators at the stadium cheered wildly to make the match exciting all through it.

C. When the spectators at the stadium cheered wildly, the football match became exciting all through it.

D. The football match was so exciting that the spectators at the stadium cheered wildly all through it. 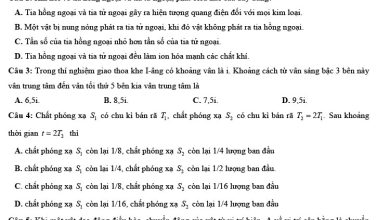 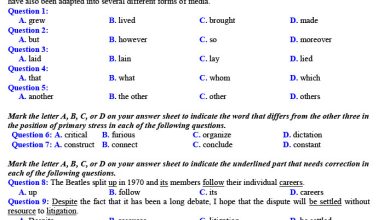